Newsweek reported that former President Donald Trump referred to the US as an Evil Nation. He also said that he would be sentenced to the electric chair if he were to be accused of corruption similar to what Joe Biden and his son, Hunter, are facing. 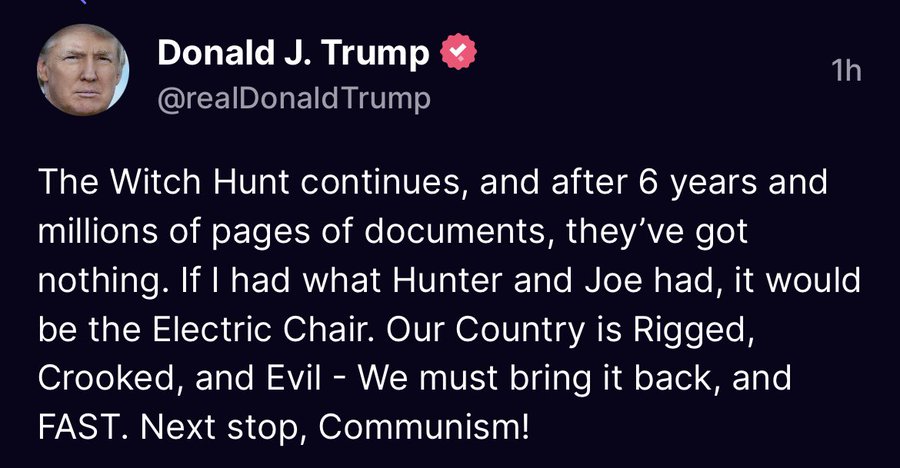 After six years of what Trump calls a witch hunt, which has resulted in millions of pages of documents, Trump claimed that if he had done what Joe and Hunter did, they would have ordered the electric chair. He also stated that the country was under rigged, corrupt, and evil leadership conditions and that he would bring it back to its former glory.

Several investigations are currently looking into Trump's businesses, his conduct during the presidential election, and whether or not he illegally stored classified information at his Mar-a-Lago property. He has maintained his innocence, and he has repeatedly referred to the Biden family as corrupt.

Trump's statements came after the start of his personal trial regarding his business, The Trump Organization, which is accused of committing tax fraud from 2005 to 2021. The Manhattan District Attorney'S Office charged the company with multiple counts of fraud and conspiracy. The Trump Organization has not been charged personally, though the company has pleaded not guilty.

Trump and his allies have been accusing Joe Biden of corruption over his son Hunter's business activities. In 2018, an investigation was launched into Hunter Biden's potential illegal campaign finance and foreign lobbying activities. Republicans have vowed to carry out more investigations if they regain control of Congress in the upcoming elections.